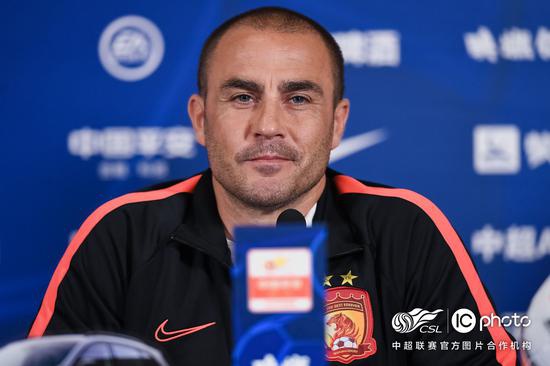 At 19:35 on October 16th, Beijing time, the 2020 China Ping An Chinese Super League will enter the fifteenth round of competition. The match between Hebei China Fortune VS Guangzhou Evergrande Taobao will be held in Kunshan Sports Center. On the afternoon of the 15th, Evergrande head coach Cannavaro attended the pre-match press conference to introduce the team's preparations.

After the national team came back, Wei Shihao has been training with the team. His biggest problem is that he has not played for more than a month, but he has been able to train with the team.

Goolat on loan to Hebei Huaxia Fortune was a decision we made together. It was interesting that he could not play against Guangzhou Evergrande. In fact, Goulart’s topic is more sensitive. As the head coach, I know Goulart’s abilities very well. It is very important to the national team and the club. Due to injuries, Goulart has not played for a long time. He recovered from injury. After that, he joined Hebei Huaxia Fortune on loan and basically played all the games. He performed very well in some games, and his performance in some games needs to be improved. Goulart is still trying to return to his peak state. It is not that he has returned to his peak form in 2015 after more than two months. We still hope that Goulart will play more games and return to his best form as soon as possible.

As a defender, it will be very difficult to face these players with excellent physical conditions (Marcao). I have always emphasized with the defender that it is better for the defender to be vigilant if his personal ability is not strong. Against such a forward, you must be fully focused and 100% focused. Malcao is very capable of grasping opportunities, and this forward is very dangerous. In addition, I would also like to say that our team also has excellent forwards, and they will also seize any chance that the opposing guard makes a mistake.