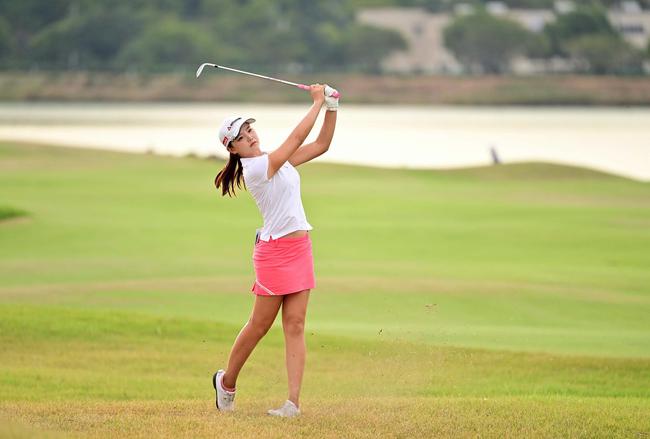 Objectively speaking, this is not a particularly good position, but considering a series of recent performances, the Beijing girl is still satisfied with her progress.

"Although the ranking is not so high, I am still satisfied with my performance so far," Shi Yuting said, "because my recent state is actually quite poor. And the past two days have improved compared with my previous self."

Shi Yuting said that about two weeks ago, she felt that her long-swing stability had slipped a little, so she adjusted the way her lower limbs move during the downswing. The result of this adjustment is that the ball is more stable, but the force, that is, the reaction force after kicking the ground is obviously smaller than the previous action, and the distance is shortened a bit.

In addition to continuous combat, it is more fatigued. Shi Yuting said that the distance between the iron and the wood is shorter, and the driver is 10 to 20 yards shorter.

However, Shi Yuting's results were mediocre. In addition to the decline in long shots, there were also unsatisfactory putting scores. "The main reason is that I didn't deal with the pressure. Since I hit 11th place in that game, I have very high expectations of myself, and too much attention has been paid to the pursuit of results," Shi Yuting said honestly, "and I was a bit too anxious in the process. The resistance to putting pressure and the ability to concentrate have dropped a lot. In fact, the situation is quite serious. My hands were a little trembling when putting, and there was no confidence in putting."

Shi Yuting said that after the end of the Desant East China Sea Women's Classic, she rested for a week and then restarted from the basics. She felt that her state had improved significantly this week. Although the current ranking is not high, she also viewed the result objectively. After all, the first round of the 17th hole (par three) encountered a poached egg in the bunker, and it took a few times to get out of the bunker. She swallowed three bogeys and lost three strokes in a hole.

"I hit 3 birds yesterday and 4 birds today. The goal rate of putts has increased and the distance has improved," Shi Yuting said. "I will try my best to enjoy the game later, calm down and deal with it, hoping to get better later. The better."

This week’s Women’s Japanese Tour is the Japan Women’s Open. Because the tournament is hosted by the Japan Golf Association and the qualifications are set separately, Shi Yuting did not participate, but she will return to the main battlefield next week.